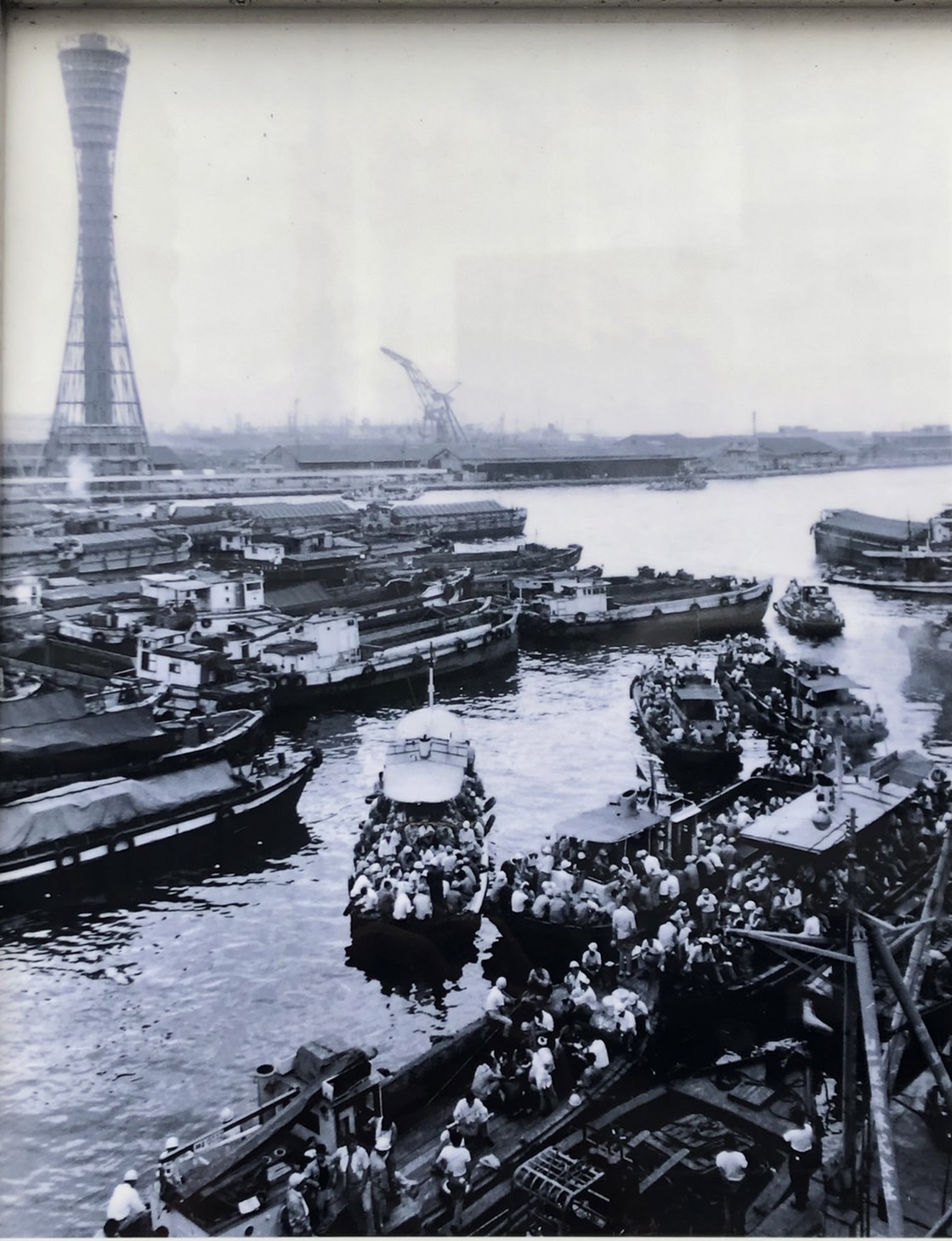 Do you know the word "barge"?

The word "hashike" means "to float a boat. Although a barge is a boat, it does not have an engine and is pulled by a boat called a hiki-bune to carry cargo. These actions are called eiko (towing).

According to literature, eiko boats have existed since the Edo period (1603-1867), and at that time they carried people and functioned as passenger boats.

After World War II, they were used for imports and exports. For example, it goes to a factory in the Seto Inland Sea, loads cargo, returns to Kobe Port, and transfers the cargo to an ocean-going ship for export.

To explain its structure, it has a long and narrow appearance, and in the middle there is a depression for loading cargo, called a "cargo space. The remaining 20% is used for living quarters and 10% for passageways.

The cargo nooks would hold water if it rained, so boards were placed on top of them and sheets were laid over them to keep the rain out.

Later, a lazy boatman turned his attention to tents. A triangular wire was threaded between the cargo holds, and a tent was hung from it to keep out the rainwater. The ends of the tents were fixed to the deck with cables so that rainwater would run off into the sea.

When it was time to unload, the tents were gathered around the edge and secured, and the wires were loosened and slid out of the cargo hold as if the straps of a bra were removed from the shoulders. This allows for smooth unloading (slinging).

As mentioned above, people lived on barges because they had living quarters. After the war, many families from various ports in the Seto Inland Sea migrated to the Port of Kobe to live on barges. At first, barge residents were married couples working and living together, and when their children were born, they began to work while raising their children. When the children grew up, they would go to school.

Morning comes early in the harbor, and the children are disembarked from the barges as soon as the sun rises, heading out to sea.

When they left school after elementary school, the barges at home were sometimes in the middle of offshore loading and unloading.

Also, port work involved half-night or all-night overtime, and many children could be seen waiting in the harbor at dusk.

Public organizations saw this and built a children's dormitory on top of a mountain, where the students lived.

The children still missed their families. On weekends, they would go to the harbor to look for their family's barge, but if they were unlucky, the barge would be out at sea loading cargo and they would not be able to see their family.

The barges are also a home and a playground for the children. Some of the children running around on the barges often lost their footing and fell overboard. Some were lucky enough to be saved, but many others lost their lives. Jizo statues with red hanging scrolls are enshrined at the docks of Kobe Port as memorials to those who lost their lives.

With this background in mind, the Kobe Port Welfare Association established a house in 1968.

A three-story house was built on top of the Kobe Municipal Government-produced No. 1~3 shed warehouse.

It is a five-story structure with the lower two floors as warehouses and the upper three floors as housing.

At the time of construction, the building faced the port across the road, which had been used as a barge yard, but now the connection to the port has faded due to land reclamation.

The houses are designed in a U-shape across the park, which at the time of construction was a playground for children with a slide, but now the number of children has decreased and the playground equipment has begun to be removed.

Port Island, a man-made island visible from the Port of Kobe, was opened to the public in 1981. Later, Rokko Island was reclaimed. Until then, the Port of Kobe was all ocean if you looked out to sea.

Oceangoing vessels (hereafter referred to as "main vessels"), which were responsible for trade, were anchored offshore, and a number of barges surrounded the main vessels for loading and unloading cargo. At that time, crane technology was scarce, and small amounts of cargo were carried by hand. These people were called laborers, and a large number of them were needed.

The agency that mediated these laborers was called "Otsunaka," or "Otsunaka" for short. Around dawn, many "ototsu-naka" were seen in town looking for laborers, and the area became known as "Otuchu-dori" (Otochu Street), where several offices of these agencies were located.

After the war, there were so many of them that one could cross to the other side of the river by barge, but the number of barges has decreased due to the containerization of cargo.

Nowadays, few people live on barges, and the term "crew" has been changed from "boatman" to "worker.

As a side note, nearly 90% of schools in Kobe, both public and private, do not have shoe boxes. This is said to be due to the increase in population after the war. Instead of shoe boxes, students in Kobe have a drawstring bag called a "jacket bag. In addition, classrooms are coated with waste oil to keep them dust-free.

It is thought that barges are also playing a part in this increase in population.

This is the postwar history of barges and the Port of Kobe as I know it. The port was not a clean port, and there were many dangers and bloodshed. Otunaka-dori Avenue, now lined with second-hand clothing stores and tower apartments, was not safe at the time.

The city seems to be trying to hide this past, but I like this kind of history because I feel nostalgia for it.