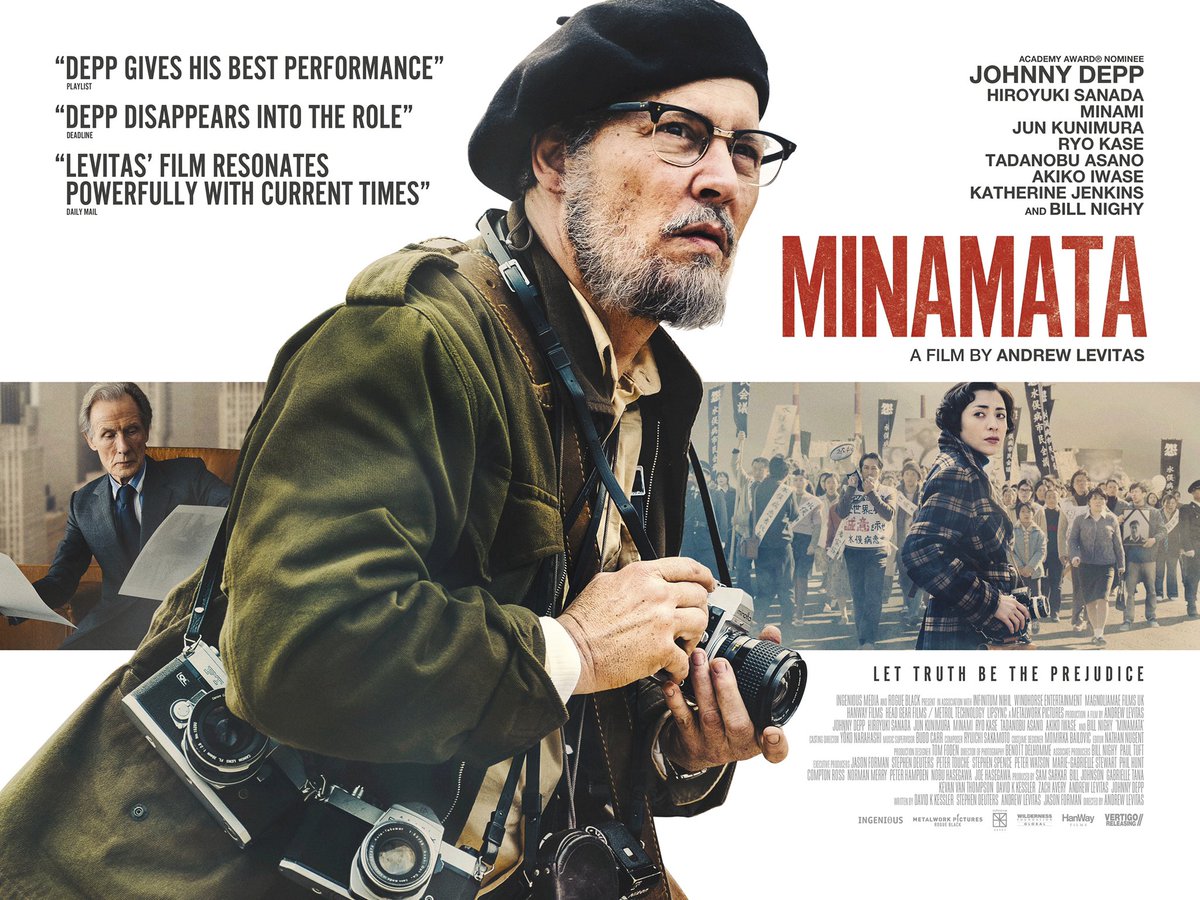 In the early 1970s in New York City, Eugene Smith, once a respected and famous photographer for LIFE magazine, had been away from active duty for a long time due to a wound he sustained while covering the Battle of Okinawa during the Pacific War, and was living a life of drinking.

One day, he met Eileen, an interpreter working on a commercial for Fujifilm in Japan, and they hit it off. One day, he meets Eileen, an interpreter at a commercial production for Fuji Film in Japan, and they hit it off. Eileen informs him that a large company in Kumamoto, Japan, called Chisso, has been discharging wastewater from its factories and many people are suffering from Minamata disease, an organic mercury poisoning, and asks him to cover the story. Eugene went to LIFE again, explained the serious situation in Minamata, and asked the editor-in-chief to let him cover the story. He managed to get the editor's approval, but the editor nailed him, saying, "Don't let me down, or yourself," so Eugene and Irene went to Minamata. Despite being an idyllic fishing port town, it was dominated by a deathly silence, a towering Chisso factory, and a battleground of people tormented by the disease.

Eugene continues to take photographs while interacting with the people of the city, but the enormous power of Chisso slowly torments Eugene, his patients, and their families, and finally someone sets fire to the darkroom where he works, and he loses everything. In anger and despair, Eugene makes up his mind and makes a proposal to the patient's family. He decides to make a proposal to the patient's family, which would later lead to world-changing results…

In recent years, Johnny Depp has only given the impression of being an actor who is good at disguising himself, but this time, he seemed to be in the right role for the first time in a long time.

At the beginning of the movie, when Ten Years After's "I'd Love to Change the World" was playing, I had a feeling it was going to be a good movie. Well, Jonide liked rock music, didn't he? That alone gave me a sense of his passion or enthusiasm.

Eugene Smith, an American born in 1918, became a photographer for "Newsweek" magazine in 1938, and later began contributing photos to "LIFE" as a freelance photographer. During the Pacific War, he was bombarded in Okinawa and suffered from burns caused by the blast, which made him wander between life and death. In 1955, he joined Magnum Photos, where he established himself as a photographer.

In 1970, he met Irene, an interpreter, and they married the following year. They soon moved to Minamata, and in 1975, he and Irene published a photo book titled "MINAMATA" under their joint names.

A Hollywood film dealing with the four major pollution problems in Japan. Regarding the production of this film, Minamata city council ordered from the beginning of the filming that the negative image of the film should not be spread, and refused to support an advance screening of the film in Minamata. In response to this, director Andrew Levitas issued a comment criticizing the city's response, saying "What is the priority" and "It is a very sad situation.

Behind such a response is the reality that the problem of Minamata disease has not been solved and many patients have yet to be helped. I am embarrassed to admit that I did not know about it, nor did I pay attention to it. 53 years have passed since the disease was first recognized as a pollution-related disease in 1968, and yet the government and the companies have still left the problem unresolved.

Why is Hollywood making a movie about Japan's problems now?

The fact that Johnny Depp, the producer of this movie, was interested in Eugene Smith was a big factor, but the current world situation is probably a very big factor as well.

As I have mentioned in this blog from time to time, the world is becoming a picture of "small voices" and "oppressed people" versus "big voices" and "huge capital. Climate change, #Me Too, racial discrimination, LGBTQ, corporate pollution, nuclear power plant accidents, and so on.

The cover-up and the attitude of the government and corporations portrayed in "MINAMATA" was also keenly felt during the nuclear accident of 3.11.

The 2013 film "A2-B-C", a documentary by American director Ian Thomas Ash, followed the lives of people living in Fukushima with a lot of anxiety after the nuclear accident, and the reality of the thyroid cancer tests conducted on children.

I happened to have a chance to talk to the director at the screening and asked him why he couldn't make a documentary like this by himself about a serious accident that happened in Japan. He replied, "If the same thing happened in the U.S., I'm sure there would be the same attempts to hide the truth and restrictions on reporting. It's the same in every country. That's why journalists, the eyes of the outside world, must tell the truth, and their role is very important.

The Minamata disease lawsuit also had the same structure. The government and the corporations tried to keep the truth out of the press as much as possible, and tried to keep the lawsuit with the plaintiffs as small as possible. If Eugene Smith had not taken photographs in Minamata and published them in the world-famous photography magazine LIFE, the road to relief for the victims might have been much more difficult.

In Japan today, there is a tendency to neglect such journalism, which gives me a sense of crisis. There is an atmosphere of criticism and vilification of journalists who go to overseas conflict zones or travel danger zones. They shout about self-responsibility and say that there is no need for the government to help them if something goes wrong.

However, when Japan is in such a critical situation, for example, when a military coup d'état occurs and citizens are killed, who will inform the people around them of the current situation and help them? However, in Myanmar, the Internet connection is cut off and it is difficult to send out information.

You may say that such a situation would never happen in Japan, but unexpected things happen all the time. For example, sarin gas was sprayed on the subway in Japan, a country that has never been involved in conflict, or a nuclear accident occurred.

Portraying the Minamata disease issue through the eyes of Eugene Smith, a journalist, exposes the structural flaws of modern society and shows us that it is a problem of the present that has not changed. And that it is happening all over the world.

The climax of the film is the shooting scene of Tomoko and her mother taking a bath.

There is no need to explain it. It is a painful reminder that a single photograph can move people's hearts to such an extent.

The city of Minamata has changed so much that there are hardly any vestiges of the early 1970s, so the filming took place in Serbia and Montenegro. The location scouting was amazing. I guess this is the essence of Hollywood movies.

I forgot to write about it, but the music was composed by Ryuichi Sakamoto. There's no need to explain, it's just like a "stable" film.