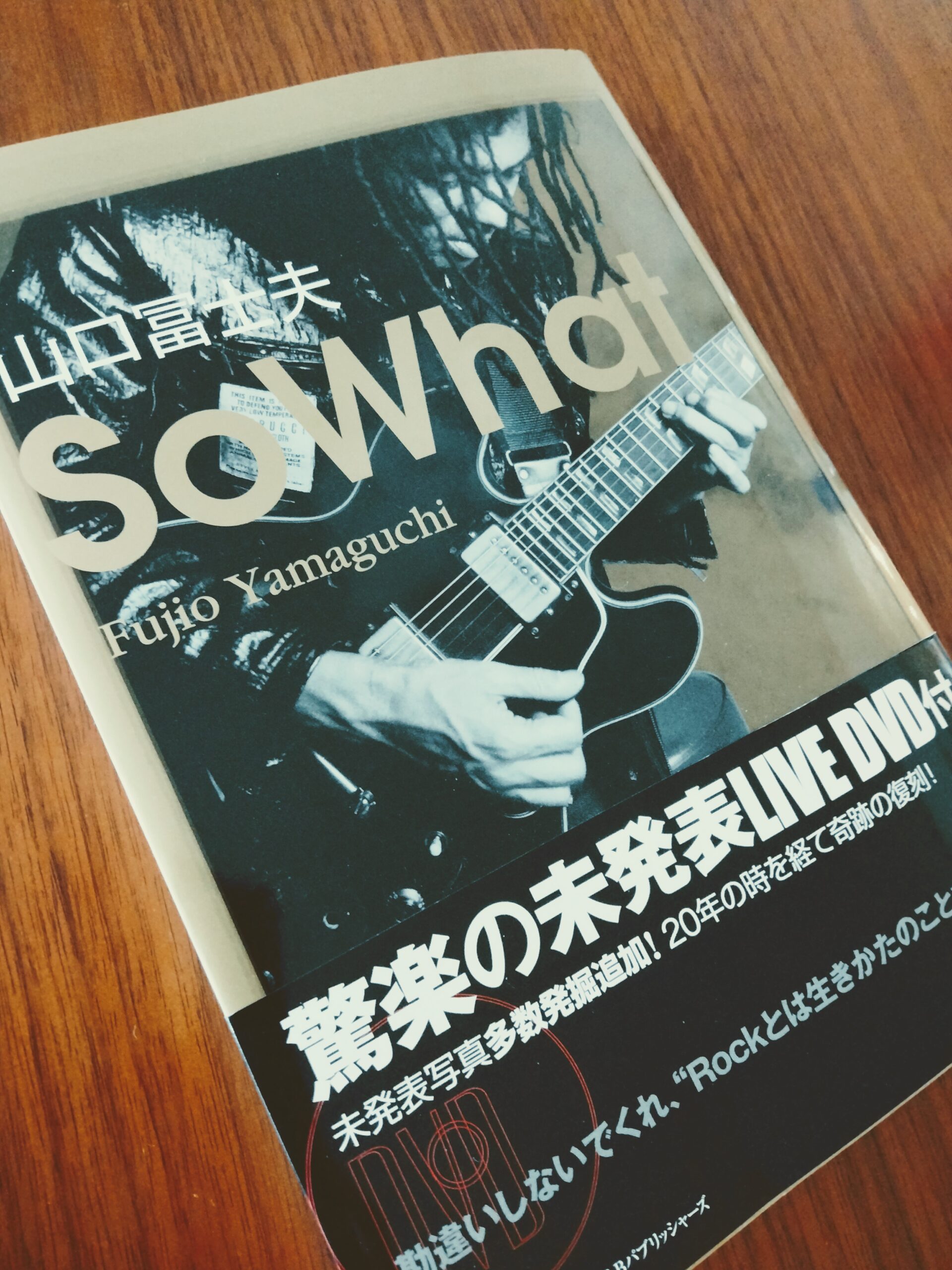 At a record store in Shinsaibashi, I found a record with an extraordinary aura.

Wow, what is this? It looks absolutely awful. The picture is scary, too. What should I do, should I buy it?

The store clerk couldn't help but tell the lost high school girl, "There are more records you should listen to, they are expensive.

So, instead of buying the record, I bought something else. I don't remember what I bought, but the jacket must have left quite an impression on me, because I remember this exchange persistently.

But, but, I hate the old man at the record store. I don't know why I stopped buying it then… I can't buy it now… that record.

The encounter between me and "Murahachi" started from such a misunderstanding.

Well, it was a selfish assumption.

It wasn't until I became a university student and moved to Kyoto that I started listening to their music.

The band with the challenging name "Murahappun" was a Japanese rock band formed in Kyoto in 1969 and disbanded after only three years of activity. The band consisted of Kazushi Shibata, aka Char-Bo, Fujio Yamaguchi, and another friend of Char-Bo's, Tetsuo Asada, on twin guitars. The bass guitarist and drummer changed frequently. The guitarist, Fujio Yamaguchi, was born in Tokyo, half British soldier in the occupation forces and half Japanese mother. Vocalist Charbo was born in Kyoto. His father was a far-left activist who became a far-right activist after the war, one of the most prominent activists in Japan. He was born in Kyoto. Char-Bo himself was a hippie among hippies, having moved to the US in 1969 and seen the Rolling Stones at the Altamont festival.

As you can see from the video, the performance and music are exactly like the Rolling Stones.

However, the un-Japanese atmosphere, the performance, and the harsh Japanese lyrics…they are full of elements that would make them a cult favorite.

In Fujio Yamaguchi's autobiography, "SoWhat," released in the 1990s, Yamaguchi says, "Whether you're good or not is not the point.

-Whether I'm good or not is secondary. To go beyond the boundaries of Japanese music, I thought it would be better to have someone who was artistically inclined instead of asking a professional musician.

That's why, when we formed Murahachi, only Fujio Yamaguchi had the skills as a musician. The rest of the members were chosen based on whether or not they fit together. Tetsuo Asada had never even played the guitar before. Nevertheless, by sticking to the "Japanese" language, Murahachi constructed their own unique world view.

As you can see, it's a prose poem written in hiragana, and it was a unique sensibility that made him stick to the unique Japanese tool of hiragana. This particular style of writing seems to have originated with Charbo.

The world he saw was different from that of his contemporaries, Happiend… No, it was the same kind of scenery, but what happened to the rough, native smell? The beauty of Happi Endo is the beauty of the Japanese language, the shyness of the Japanese people, and the Yamato Nadeshiko element, which everyone can relate to. Horrifying lyrics, fuzzed-out guitars, crazy stage performance by Char-Bo…

The band seemed to be distinctly different from other Japanese bands of the time.

Yamaguchi also said, "No matter how high your ideals are, you can't have it all.

The band, made up of amateurs, began to sink slowly, just as Fujio had said. However, more than the musical elements, what led the band to collapse was the communication in the name of business.

As the band began to gain popularity, of course there was talk of releasing a record. For some reason, Char-Bo began to do management-like work. He was also the one who signed the contract with ELEC RECORDS on his own. It seemed that Fujio couldn't stand the idea of Cha-Bo going through the whole process by himself.

When the band's frustration was at its peak, Tetsuo Shibata left the band and Murahachi broke up.

The gap between ideals and reality, and money-related rivalry are common reasons for the breakup of a band, and I was deeply moved by the fact that Murahappan could not escape this theory. They are unique, and no one can recreate them. Even if the old members got together, I think it would be impossible.

The times, the climate, the people's consciousness and drugs, the members' madness…

It's as if all of these things just clicked together and unraveled into a complex circle of wisdom.

SoWhat also has an interview with Char-Bo and Tetsuo Asada, and the text doesn't give off the aura of the vocalist and guitarist of the "legendary band" at all. It was as if Murahachi was the band of Fujio Yamaguchi and they had nothing to do with it.

In the interview, Tetsuo Asada made a few comments that were to the point.

These were the words that described the current situation of Fujio Yamaguchi in Teardrops, but I also got the impression that they were describing something about themselves in the past. For them, the activities in the village must have been an intense experience. To escape it, Fujio Yamaguchi went on a trip after the breakup and made a solo album, "Himatsubushi. And Char-Bo indulged in drugs and died of an overdose alone in an empty room. This was 20 years after the breakup.

After that, Fujio Yamaguchi joined Makoto Ayukawa's Sheena and the Rockets until the formation of Teardrops, or formed a short-lived band, and I got the impression that he moved around rather a lot.

The first time I saw Fujio Yamaguchi in the flesh again (on video) was after the Great East Japan Earthquake in 2011, when he was playing guitar alone outdoors with an anti-nuclear message after the nuclear accident. It wasn't on TV, but on Tweakass, which was becoming popular at the time.

He had been suffering from an illness and looked very thin, but it was his way of life and his belief in his activities.

He was still very active, and he sometimes came to Kyoto for live performances, so I felt as if I could see him anytime. However, in 2013, he was pushed by a GI in Fussa, Tokyo, and hit his head, dying in a daze. He was 64 years old.

When I think about it, being born after the war to a Japanese mother and a black soldier of the occupying forces, growing up in an orphanage, dreaming of being active overseas but never going abroad, and dying in an argument with an American soldier… I can only think of it as a symbol of something. It was a bitter memory of defeat in the war, a life of anti-establishment activities, and a sad death due to misunderstanding and bad luck.

I was inspired to read his autobiography this time when I heard that his solo album "Himatsubushi," released after the breakup of Murahachi Bun, was to be reissued.

Having been away from Murahappan for a while, I listened to the CD and watched the video again, but the sound was really bad. I can't deny that the live sound could have been a little better. Also, there are very few videos. And the bonus videos that come with the autobiography (mainly the Teardrops ones) are also….

As for "Himatsubushi," the one thing mentioned in the autobiography was the poor sound quality. He took a lot of pains to create the sound source, but he was not happy with the cutting and mastering.

On the other hand, I didn't mention much about the contents of the album itself.

He says, "I wanted to sweep away the impression that I was a blues guitarist," but all the songs were bluesy to the fullest. Including the title. As he said, "I wanted to try different things again," he included a variety of songs with different tastes, but they didn't seem to fit together somehow.

However, as the years went by, "Village Hachi-bun" became a "legend" (I hate that expression), and it became a pillow talk for Fujio Yamaguchi. In his later years, it seems that he was willing to do so, but the experience of going through the ages in his 20s or so must have been too much for him to digest.

The live album "Village 8" was released four years before the Sex Pistols released "Selfishness" in 1977.