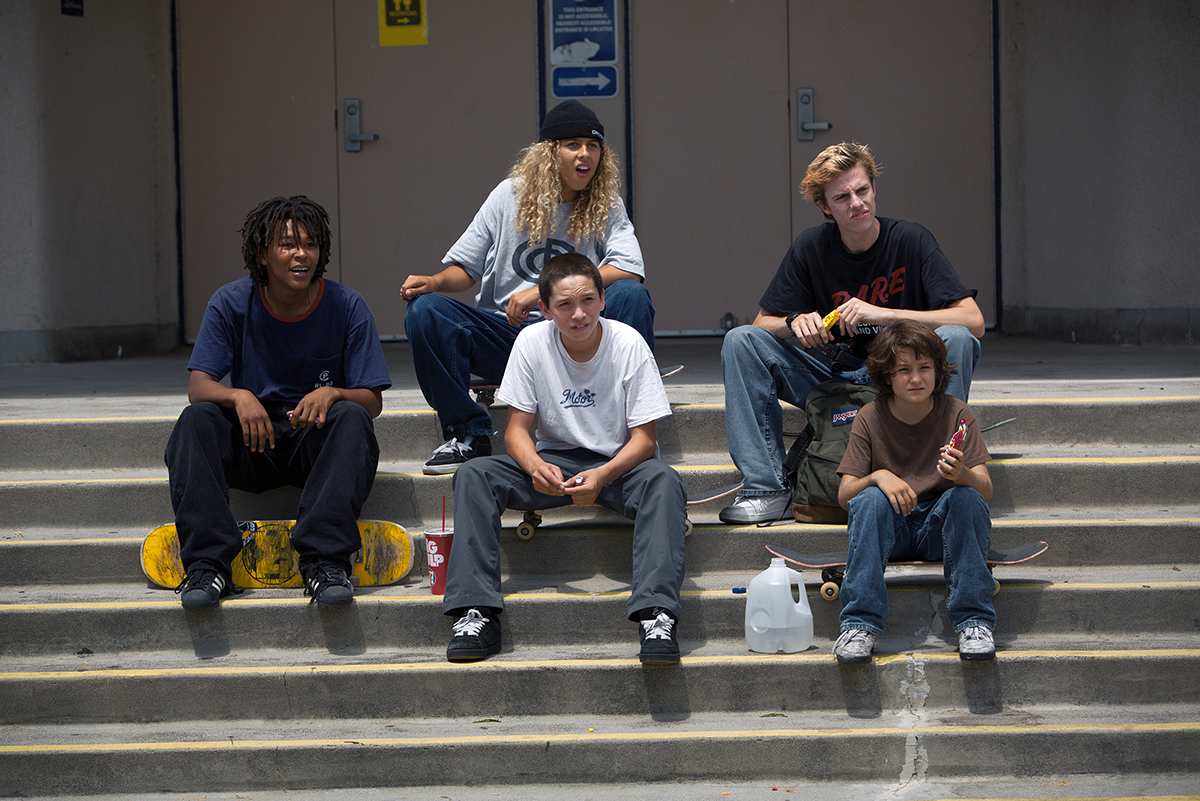 It's the mid-1990s in Los Angeles, and 13-year-old Stevie lives with his older brother, Ian, and mother, Dabney, who is five years his senior. One day, Stevie stops by a skateboard store in town and meets a group of boys who hang out there, and he soon becomes one of them. He spends his days with the boys, who are free and extremely good at skateboarding. What awaits Stevie when he gets too carried away and gets too close to them…

It seems like an act of courage to make a film titled "mid90s" that looks back at the mid-90s in 2018. That's just my personal opinion. It's very difficult to describe a certain era in today's world where there is no dramatic structural transformation in the continuity of time.

As for the 90's people, there were movies like "kids" and "trainspotting" that were the cultural milestones of the 90's, and many of us have been immersed in the culture derived from them.

One of them is love, skateboarding, hip-hop, drugs (if you can call it a culture), trance music…

The focus of "mid90s" is on the world of skateboarders. The music seems to cover everything from punk to mixture, hip-hop, and grunge.

Whether you see it as sweet, beautiful, or just not 90's at all, there are many ways to look at it. One thing I can say is that I can feel the director's "compassion" in this film.

So, the boys who appear are also sincere and hard-hearted.

The Mamas & Papas' "Dedicated to the one I love," which plays during the scene where the boys are skateboarding through the streets of Los Angeles at dusk, is a direct representation of the boys dedicating their entire lives to their boards.

On the other hand, "kids" was different.

You are in the city, you have no money, and you can't find anything to do. The frustration of being stripped limb from limb and not knowing what to devote yourself to. The urge to destroy. I could relate to them. I could sympathize with them, and I think many people saw themselves in them.

Both are my teenage selves.

So I think the warm gaze of "mid90s" is also my own gaze now.

For me, the mid90s, or 1995, began with the Great Hanshin-Awaji Earthquake.

Living in the Hanshin area at the time, right in the middle of the damage, I was suddenly thrown into confusion and had to spend my days in a state of incomprehension. This was followed by the Aum Sarin incident in March, and while I was still living in a pile of rubble, the world had completely forgotten about us, leaving only our inconvenient lives behind.

When I think about it, I feel like I was always living next to death at that time. Soon after the disaster, I heard through the wind that a girl from my class had committed suicide. Some people suffered the loss of their daughters and grandchildren at the same time, and wondered why they were the only ones who survived.

But when it became a part of my daily life, I didn't feel anything anymore. I didn't care if I died at any time, that was the extent of my feelings.

It was an extension of life, even when I spent the night shivering next to the dead bodies that occupied half of the Hinoike Gymnasium where we evacuated.

That's why movies about teenagers are always somewhat unattached to life.

You can be reckless, and a lucky child will survive, or a child who seems to be living cautiously will suddenly die.

As adults, we look up to the heavens and think, "What a foolish thing to do," but to teenagers, it's nothing.

Is there a need to condemn or even pity this feeling?

We've been through it ourselves, and we've been crazy about music and love.

As the movie ends and the theater lights up, one of the five high school students in the back of the room takes down his skateboard and shouts, "Fu00k! I stand up, trying to hold back a burst of laughter. I guess this movie has become "My Story" for these young people.